Would you like to rate our services and give us a feedback on Google? Give Us 5 Stars & Write A Feedback →

You’re out in a boat with a very experienced sailor friend when he starts feeling ill, then collapses on the deck and passes out. You don’t know enough to pilot the boat yourself or even how to operate the radio, but there are some flares onboard and instructions showing you how to fire them. You can see there are other boats far off in the distance so you figure it’s worth a try. You fire off a flare and it shoots skyward, blazing red high above you. Then you fire off a second one to be sure. Within minutes, the boats are coming toward you and you breathe a sigh of relief; you know help is on its way.

Thank heavens for flares, which have saved countless lives at sea. They’re fantastically simple signaling devices similar to fireworks, but they’re designed to communicate a much more direct message in an emergency. Have you ever wondered what they’re made of and how they work? Let’s take a closer look!

What is a flare?

A flare is a tube packed with explosive chemicals that burn very brightly or give off smoke, usually to attract attention in an emergency. The two main kinds are handheld flares (which operate on the ground) and rocket flares (which are fired into the air).

Handheld flares also come in two kinds. Signal flares burn with a bright red light as you hold them, while smoke flares (also called smoke signals) are designed to be held in the hand, placed on the ground, or dropped overboard into the sea to give off huge plumes of colorful (generally orange or red) smoke. Flares like this are typically visible up to about 5km (3 miles) away for anything from 30 seconds to several minutes. Since smoke doesn’t generate light, smoke flares are useful only in daylight. 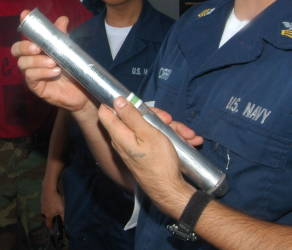 Rocket flares are bright enough to work in daytime or night. They’re usually fired high in the air so they can be seen from much greater distances than handheld flares (up to 40km/25 miles or so in good visibility).

The simplest ones are like fireworks, with two “stages” (separate explosive burning sections) and are entirely self-contained. You hit them on the base (or bang them on the ground or the deck of a ship) to strike an explosive percussion cap. This triggers the first stage, which propels the inner part of the flare into the air for several seconds. At that point, when the rocket has reached a height of maybe 100m (300ft) or so, the second stage ignites and the flare explodes with an intensely bright red or orange light. Some flares release red stars. 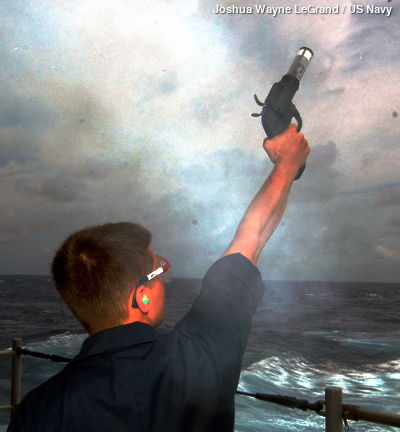 Another kind of rocket flare is fired from a specially designed flare gun or Very pistol.These flares are aluminum tubes about 3cm (just over an inch) in diameter and 30cm (12inches) or so long. When they’re fired, they shoot rapidly to a height of about 300m (1000ft). At that point, they explode with a loud bang and release a brightly burning flare suspended from a small parachute that drifts very slowly downward, maximizing the amount of time for which it can be seen.

The Very pistol is named for American naval officer Edward Very, credited with inventing it 1877. There’s some controversy over whether the idea was actually conceived by another naval officer, Henry H. Coston, who received a similar patent a few months later and was prevented from filing sooner by his own military duties. Very’s 1877 patent describes a fairly simple signal cartridge with a powder charge at the bottom and then some chemicals packed above “of such materials as will cause it to burn with a flame of any desired color.” It was designed to soar to a height of roughly 90m (300ft) so it could be seen from at least 5km (3 miles) away. Coston’s patent (illustrated in the box below) is quite a bit more elaborate and describes a cartridge that can fire multiple colors in a particular sequence, thus signaling a variety of different codes.

What colors are flares… and why?

Red and orange flares always indicate distress and if you see one you need to take action. White flares work in the same way but are usually designed to illuminate an area at night (for example, if someone falls overboard) or to prevent imminent collisions at sea (by indicating a ship or boat’s position to another vessel); they don’t normally indicate danger.

What makes a flare fire red or orange? Just like a firework, it’s the chemicals inside, which are chosen specifically so the flare burns brightly and with a specific color. The main ingredients of flares include strontium nitrate (which provides the color—it burns with a bright red or orange-red flame), potassium perchlorate (a powerful oxidizer, which makes the strontium burn rapidly), and magnesium (which burns very brightly). Unfortunately, perchlorates (containing chlorine) aren’t very environmentally friendly, so organizations like the US Navy have been working hard to develop perchlorate-free flares using copper (to make a green color) and polyvinyl chloride (to enhance the color). 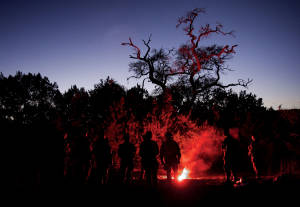 Flares are a good thing to have with you, but remember that they’re to be used only in emergencies. They’re designed to get you out of danger but, ironically, they are themselves very dangerous: they contain explosive chemicals and, let off the wrong way, they can cause serious injuries and fires. Flare guns are regarded as firearms in some states or countries and their use may be banned or restricted by law. If you plan to carry flares, be sure to familiarize yourself with exactly how they work before you need to use them. Read the labels carefully, follow any safety guidance to the letter, and don’t store them longer than it says on the packet. Be sure to find out any rules, laws, or signaling conventions for using flares in your particular country or region.

Navi Maritime aims to provide its valuable customers with a quality and reliable service concept with its experienced team. Click for more

Do You Need Support?

If you are not sure which service suits you then visit our contact page. One of our sale presentatives gonna contact with you soon. Go to Contact Page

From 8:3o to 19:30, Closed at Weekends
Send us email anytime to operation@navimaritime.com

Request A Call Back!

Just submit your details and we’ll be in touch shortly. If you have any further questions Click here to visit our contact us page for more detailed our contact options.